Go and Build: Sentences as the Building Blocks of Fiction 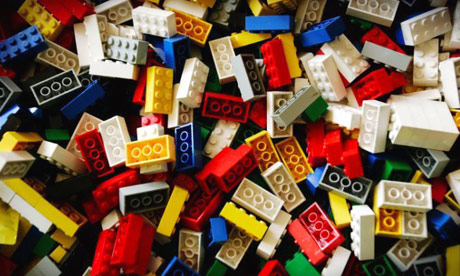 My son is a Lego addict. At home, he has boxes and boxes of the tiny, plastic blocks. At school, in his aftercare program, he only gets a box of about one hundred Legos. Every evening when I pick him up he smiles and holds up his day’s creation with those one hundred Legos. Each day brings a new build: a rocket ship, a prison, a sailing boat, a magical sword. He has one hundred Legos but by just organizing them in a different way, by slowing down and choosing to think about what he’s building, he creates something unique each time.

Francine Prose’s chapters, “Sentences” and “Paragraphs”, conveyed the same type of wonder I feel when seeing my son’s daily creations. I felt I could hear her say, “Look here! Look at what this writer did with the very same words you and I get to play with. Look how they built so wonderfully! Look at this marvelous arrangement. Pay attention to a master builder at work!” Prose provides us a constant reminder as writers to pay attention. Through varieties of examples, she encourage us to look at what the writer is doing, why they are doing it, and what effect that creates on us. So, how do our two writers this week, Octavia Butler and William Faulkner, write their sentences and construct their paragraphs? And what effect does that create on the reader?

William Faulkner demonstrates mastery of the paragraph and the sentence in the opening page of “That Evening Sun”. The first sentence of the work hints, if darkly, that the world was different in the near past: “Monday is no different from any other weekday in Jefferson now.” The addition of the “now” at the end of that sentence turns it. The rest of the paragraph (which is a singular sentence itself) flows out from that point defining the “now” with Hemingway’s “rhythm”. The next paragraph cements the story and takes us into the past, a past which seems unfathomable in today’s world. The second paragraph is also a singular sentence. Had the first two paragraphs been joined and created a paragraph of only three sentences the effect of the change in the world of Jefferson would have diminished. Faulkner demonstrates the use of a sentence to unnerve us (if not us, then definitely me): “the quiet, dusty, shady streets would be full of Negro women with, balanced on their steady, turbaned heads, bundles of clothes tied up in sheets . . .” The second sentence in the first paragraph outlines the destruction of nature in the falling of the shade trees for electric poles. For a moment, the reader has started to grudge the change time has produced. Then Faulkner illuminates a time of post-slavery but a world of servitude and segregation. The reader no longer regrets the change time has brought. We welcome it. That quick switch in perspective cements the atmosphere in which we’ll move through the rest of his story. The paragraph split and the extraordinary use of three paragraphs makes it so.

Octavia Butler is one of the writers whose works I keep near my desk so that I can “turn to whenever you feel that your own style is getting a little slack or lazy or vague.” Her first sentence in Kindred establishes the dangers we’ll encounter as we follow Dana. The first sentence is slight with only nine words. The first paragraph only a bit more with twelve words. While the subject matter is gruesome (losing an arm), it’s the tone the narrator communicates in that disturbs us. She reports the details of a mutilation like reading a grocery list: “My left arm.” Butler breaks the paragraph there. Nothing more needs to be added. As a reader, we are left wondering “What other horrible things have happened to this woman if losing a left arm seems almost an after-thought?” Butler doesn’t have to say that. She lets a paragraph of twelve words force us to wonder.

In this week’s reading of Butler, I was reminded of one of Prose’s statements: “[A] one-sentence paragraph feels like a punch, and no one wants to get punched.” In Butler’s first chapter, she has a single word sentence that is also a single word paragraph: “Drowning!” It feels like a punch because it is meant to. Butler is one of the writer’s that sometimes ignores the rules but to powerful ends. Dana is in the middle of the modern-day world, then moved forcefully and shockingly through time, and in the midst of her confusion encounters a young boy. The boy is in trouble and Dana has been tugged through time and space to come to his aid. His drowning is the catalyst that sets the plot in motion. It is a word that deserves its own sentence and its own paragraph.

My son often challenges me to build something with his Legos after he’s shown off his own creations. I am inspired by his creativity to make something unique so I’ll sit down and build with him. Prose seems to encourage us to do the same, “Have you paid attention? Now, go do the same. You have the same box of words they do. How will you arrange them? How will you put them together? Go and build!”