Take a journey up Highway 99. Stop off just north of Bakersfield where a young woman stands on the edge of Woollomes Avenue, looking apprehensive, debating if she should cross. She’s been dead for decades but the residents see her often enough that she’s become a stable fixture of the scenery, as normal as the billboards that line the Highway.

Follow that Highway further and you’ll encounter another roadside obscurity. John Muir’s conservationist efforts have inspired people across the world. Commemorating him via celebration wasn’t enough for the small town of Lemon Cove. To honor the champion of the wilderness, some Californians have constructed a massive wooden sculpture of his head that sits just the road, staring to the horizon, to the vastness of Yosemite.

Time for one more stop on your trek up 99? How about visiting the underground city below Old Sacramento buried when the town decided to simply raise the roads and start fresh. The storefronts still stand and some swear that the dead have migrated to roam the alleyways of a town that’s been forgotten by the tourists walking above.

You have a choice, from here. On up 99, to the brutally-sharp rubble and claustrophobic caves of the Lava Beds National Monument, to the silent, deserted ghost towns and high-mountain deserts of Modoc, the extinct volcanoes and wildlands around Lassen. Head back around to 80, through the Donner Pass–be sure to go in winter, and take some friends with you.

Or you can leave 99 and take 50. 50, the notorious mountain highway. Blocked in winter by snow, in spring by mudslides, in summer and autumn by wildfires. Stop off in Placerville, where an effigy still hangs over Main Street in commemoration of its heritage as “Old Hangtown”, and ghosts are reported in nearly every old building and mine. Follow 50 through the steep climb to Tahoe, the legendary inland sea, or venture off to its tributaries 395 and 49. 395, passing through military training grounds, ski resorts, cattle towns, and back down into the deadly beauty of Death Valley and Yosemite. 49, the Golden Chain highway, snaking through towns once infamous for their gold and hangings, through the country that inspired Mark Twain and Clark Ashton Smith.

And we haven’t even touched on Southern California, or the intense rivalries between North and South. With an economy rivaling that of many world nations, it is a world unto itself, full of mystery and legend from a hundred cultures and alternate histories. It leaves an indelible mark on everyone who passes through it.

Strange California is a new anthology edited by J. Daniel Batt and Jaym Gates, coming Autumn 2016 from Falstaff Books. The primary funding will occur through Kickstarter, authors and artists will be paid professional rates. The editors will be soliciting stories with an eye for Californians (past or present), and open submissions will be announced in early Spring 2016 via StrangeCalifornia.com, and via Twitter on @JaymGates.

J. Daniel Batt is an editor, writer, and designer. He serves as the Creative and Editorial Director for the 100 Year Starship and is the founder and organizer of the annual Canopus Award for Excellence in Interstellar Writing. His novels include Young Gods and Dreamside and his short fiction has appeared in Perihelion, Bastion, Bewildering Stories, A Story Goes On, and other periodicals. He’s most recently edited the science fiction anthology Visions of the Future published through Lifeboat Foundation. He lives in California, where he has had firsthand experience with its weirdness.

Jaym Gates is an editor, author, and public relations specialist. She has edited a number of anthologies, including Eclipse Phase: After the Fall, Genius Loci, War Stories, Broken Time Blues, and more, and is an editor at Falstaff Books. She grew up in the foothills of California, where things get strange indeed.

Falstaff Books is a dynamic publisher seeking the best voices in genre publishing. Based out of Charlotte, NC, Falstaff Books is a joint effort by John Hartness, Jay Requard, and Jaym Gates, and is in an active acquisition and development phase. 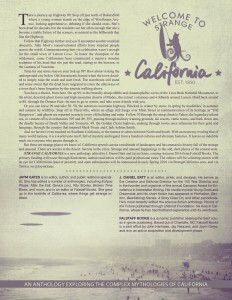