Review: The Ark by Patrick Tomlinson 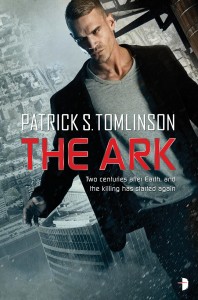 This is the story I wish I had written. Generation ship. Detective story. Tomlinson takes such discordant elements and weaves them into a fascinating story: a Manet painting, advanced probes, exoplanet imaging, and more. There are echoes of Robert Sawyer’s Red Planet Blues here and I’m hoping that this is the start of a new subgenre: detectives in space!

Tomlinson takes us through a generational ship from the ground-level view of Bryan. This is first and foremost a crime drama but don’t make the assumption that he leaves the science out of science fiction. Tomlinson has crafted a work that builds on decades of thought and speculation on the construction of generation ships and on the very recent explosion in exoplanet research. The precarious balance of a worldship (and this is a generation ship that deserves to be in that category) is critically reflected upon. The external tension of the ship’s overall biome balance is felt as they near Tau Ceti G (which happens to be a currently uncatalogued exoplanet)! Tomlinson also brings the social considerations into perspective. This is a population constrained by numerous regulations and they’re about to be let loose on a planet. The threat of freedom is also a shadow and serious consideration that Tomlinson explores.

This is speculative fiction at its best: exploration of a world that we can only imagine. On the generational ship, the world has changed. The stakes are higher. And Tomlinson navigates the changes in reality with ease.

Adam Roberts in The History of Science Fiction says that “stories of journeying through space form the core of the genre . . . the trunk, as it were, from which the various other modes of SF branch off.” Tomlinson has returned us to the core of SF. Again, this isn’t rockets and ray guns. The Ark reminds us that one of the most difficult challenges of a generation ship will be the human element. Even if we can solve propulsion and we can solve food production, human beings are persistently unpredictable. Tomlinson reminds us that who we are here on Earth is likely who we will be there traveling to another world. While Star Trek would have us believe that star travel necessarily raises the social standards of a civilization, The Ark questions that assumption. Star travel is just another tool in the hands of a wild society and Tomlinson dives deep into those ramifications.

Pick up The Ark. Read it and get captured in the adventure that detective Bryan takes. When you’re done, pause and reflect on the serious questions and challenges that Tomlinson raises. He’s crafted a book that is quite sly. The detective yarn is engaging but the engagement with serious questions of social systems on a generation ship are remarkably poignant and worthy of our attention.

So when’s the next book come out? I reached “The End” far too quickly!