The Uncanny Valley: The Dangers of Dialogue Construction in Writing Craft 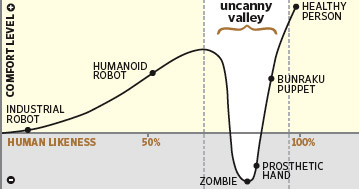 In the world of robotics, particularly android development, and computer-generated simulations, there exists a strangeness called the “uncanny valley”. The gap of the “uncanny valley” is created between when human features and behaviors appear very near to what a real human’s should be but not exactly what we expect. The valley can be small and almost impossible to define by the viewer but it creates a sense of irritation or displeasure, ratcheting up to actual revulsion.

Fiction is a simulation. In writing, we are creating a representation of humans as we define their behaviors, description, dialogue and more, through the process of characterization. Francine Prose provides numerous examples in her chapters “Character” and “Dialogue” of how masterful writers create their characters. There is no exact recipe: “literature shows us that it differs from writer to writer, sometimes from book to book.” (120) However, buried in her explanation of character, she gives this statement: “The defensiveness and aggression . . . Of Casaubon’s reply is exactly, we feel, how such a man would fight back and lash out when he felt challenged.” No matter the technique used to create characters, they must behave and talk exactly as they would if they were real.

It’s a difficult gap as a writer to traverse from describing characters and their dialogue well to making characters that behave and talk “exactly.” It is such a difficult gap that it’s very easy to find just as many examples where the characters didn’t act or talk as real people. The average reader is remarkably good at spotting an “unreal” character primarily because we are, often unconsciously, students of the real people we interact with daily. While most readers would struggle to replicate the nuances of behavior and speech that make a person seem real, they are innately aware of the “uncanny valley” when they encounter it. Even my own children, when watching TV, become exasperated when a character does something outlandish: “That wouldn’t happen!” or “No one says that!” The spell of the story is broken by poor characterization.

Dialogue is a great vehicle to forge “realness” in the making of a character. In my own life, I have struggled with actual human conversation. As a teen, small talk frightened me and the potential of holding a long and engaging conversation was just bewildering. I began a strange habit then that I carry on even today of writing down people’s conversations as I overheard them. I was pleasantly surprised to hear Prose provide her own students with this exercise as an assignment. An accidental tool to help me grasp social behavior was actually forming an ear for dialogue.

Richard Bausch displays a superb ear for dialogue in his story “Aren’t You Happy for Me?” In just a few short lines, he has created two characters with a rich relationship. The first words from the daughter Melanie is a command, “Say it,” (590) to which Ballinger, the father, doesn’t balk at but instead obeys. Even with his quick obedience, her next line “Say the whole name,” communicates her displeasure with him as if he just didn’t get it right. He adds the word “sweetheart” to his next response to remind both him and her; to remind him that he loves her and should be patient with her despite her sharp behavior and to remind her that he’s the father. It’s a reminder that he’ll repeat in various ways as further revelations are made that challenge both of those facts. The nature of their relationship is revealed with little to no exposition and yet richly done in their dialogue.

Like Prose’s example of Kleist, Bausch “creates his characters . . . entirely without physical description.” (Prose 115) The closest to physical description comes on the last page as Ballinger has a fleeting memory of his daughter Melanie as a child running through the halls in a gown of her mother’s clothes. Its briefness actually reinforces that we know these characters through what they’ve said and avoided saying more than what a physical description would’ve provided. Bausch seems to provide the memory as if he was saying that such descriptions are often unreliable definers of true character. It is also a beautiful way to reinforce the pain of the revelations of the last few pages. Their relationship, between him and his wife and between him and his daughter, can never be that simple again. Character development succeeds when the reader understands, comprehends, and is interested in the character whether the reader is actually like that character or not. By the end, we understand him and that memory pains us as it does him.

In Octavia Butler’s Kindred, it’s the conversation that gets ignored and unsaid that allows us to understand the characters. The attraction between Kevin and Dana, as told in her flashback, is palpable. He’s gone out of his way and has persistently shown interest in her. She’s doing something that would’ve been unthinkable to her earlier — she’s pausing in her work duties to spend time with him. Yet, their conversation never blatantly states their mutual attraction. Butler heightens the tension through their blunt coworker Buz’s repeated, middle-school-esque, and unfunny jokes about “vanilla and chocolate porn.” Dana grows irritated with Buz while Kevin gives a quick aside, “No matter. I heard what he said this time.” It was an acknowledgment that even if the two of them weren’t stating the attraction, others were noticing. Kevin has nudged the relationship along with a subtle line meant to convey, “I noticed that they noticed and I know you noticed they noticed.” This is a layered conversation which played out pitch-perfect because we’ve seen, and likely, experienced variations of this dance in our own interactions.

Prose highlights a master at pitch-perfect dialogue, and subsequently, character as she discusses “the subtlety, the depth, the originality and complexity with which [Henry] Green uses conversation to create character and to tell the minimally dramatic, low-key story that, thanks to the dialogue, seems positively riveting[.]” (148) We are students of writing. We are students of story. But to aspire to Green’s level of characterization, as writers, we must become students of people, their nuanced behavior, their layered motives, their spoken and unspoken revelations about themselves. To create characters of less reality risks tripping into the “uncanny valley” and breaking the spell of the story.